Review: Daughter of the Territory by Jacqueline Hammar 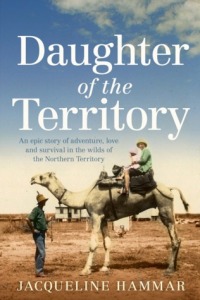 An autobiography following the life of Jacqueline Hammar who comes from one of the remotest parts of Australia – in regional Northern Territory. This book is as much of an account of what the Territory has seen from 1919 onwards thanks to records kept by her father, as he worked there as a mounted policeman. He worked in a series of outback towns, often around the Alice Springs region until injuries from his time in the war sent him closer to Darwin – which wouldn’t have been much better in those times.

Jacqueline lived remotely in bush settlements until she was sent to boarding school in Darwin – the same as many bush kids these days, being sent to Kormilda or St Johns, the only boarding schools up here, where I also attended, which drew me to the book.

Time passes through her schooling until she moves back to another inaccessible part of the Territory – near enough to Borroloola for those who know the land. Even now in these days, many parts become inaccessible at times of heavy rain where there’s literally no way out of a community unless you have a helicopter, light plane (and even then, they can’t be flown if storms are too close, which can be constant), or if you have a car on one side of the floods, then a boat, then another car waiting you on the other side – and safe places for all three vehicles in between.

Like many remote people, Jacqueline and her new husband then built themselves a bark hut and then cultivated a cattle station, bringing up their children on the land. Through beautiful and expressive writing Jacqueline tells their tale of harsh living, hardships that come from being so remote in such a time, and truly has a story that needs to be shared. This book is touted to be a new classic, along the lines of AB Facet’s A Fortunate Life, and I really have to agree.