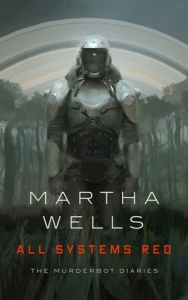 I came to this series already loving the author. The tone and character voice make this series so easy to love, and it’s the same as we see in her other work. As the series title suggests, this is about a Murderbot – what the manufacturers call a SecUnit – who has managed to reconfigure its own governor module though all it really does with the freedom is enjoy trashy television. Incredibly lethal, SecUnits quite rightly cause concern in those around them… and I mean, we’ve all been raised on fiction where robots decide it sounds like an excellent idea to ‘kill all humans’, so having one around for security who is armed to the teeth and perfectly calibrated for murder? Great!

Imagine how the humans would react if they found out that their security unit isn’t under the control of its governance module, eh?

What adds an interesting level of complexity is how human Murderbot looks, which is why it usually leaves the helmut opaque. What’s also interesting is that it can feel pain and have emotions, and is mostly incredibly anxious around humans. It also carries quite a bit of distain for humans and yet also develops (or already has) quite high morals, and comes to react protectively of its humans without much time spent on the matter.

At only 144 pages so much happens in this novella. Pretty quickly the team Murderbot is hired to protect find themselves in far more danger than they bargained for. There are quite a few members in the team but Murderbot is so much more interesting than all of them, expect perhaps the leader of the expedition, Dr. Mensah, who becomes somewhat important for our protagonist. With so much packed in its hard to review without giving much away about the plot. I will say that the reason it hacked its governor module is what drives part of this novella, and all of the next.

Murderbot is going to be a series of novellas, with another three expected to come out in 2018.