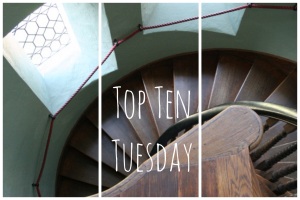 Top Ten Tuesday is an original feature/weekly meme created by The Broke and the Bookish.

Today I’m discussing my favourite short fiction, whether they’re classed technically as a short story, novella or novelette, listed in no particular order.

1. A Year and a Day in Old Theradane by Scott Lynch

As we all know I am a firm fan of Scott Lynch. Until this piece came out, my favourite short of his was In the Stacks, but this one managed to edge out in front. It helps that I heard the start read by Scott at Brighton’s World Fantasy Con in 2013. Why do I love it? The wit, the elegance of the language, and the fun dialogue.

Goodness this piece makes you want to punch love in the face, it’s just so ridiculously well done, so cute, and of course, well written. She takes a crush, slight awkward flirting, and the all important ‘how to ask someone out’ and makes such a grand fairy-tale of it all, yet also manages to make it all possible. She’s amazing.

3. The Lightning Tree by Patrick Rothfuss

This follows a day in the life of Bast, which is all one should have to say on this, really. It’s Bast. Especially when it revolves around people coming to him saying ‘I need a lie.’ Overall, this is a lovely tale, though also a little worrying. Rothfuss is a magician of words.

The growing realisation as you read this is excellent. We have a man whose unique mental condition allows him to contain multiple personalities – hallucinatory entities with a wide variety of highly specialised skills. I’m so very glad we’re getting a second novella from this short series.

Though all of Bardugo’s writing is amazing, this would have to be my favourite short of hers. It tells of a beautiful daughter, who learns the curse of being beautiful as she discovers how terrible a parent can be, with so little regard for their own kin. As with her other shorts, this has the sense of fable about it, which makes it simply beautiful to read.

Set in the Sevenwaters series, Lady Oonagh cast a curse over her own child. Now a druid, an ill-tempered raven and an adventurous young woman are drawn together as the time approaches for the evil magic to be undone. Being Marillier’s writing, this is engaging and impossible to put down.

A very beautiful, brutal tale of a fisherman and what he manages to catch, and what happens when he’s just too greedy. I loved that justice was served, and the language in this is utterly beautiful with how it describes the creature within.

8. The Water That Falls on You from Nowhere by John Chu

Read for the Hugo Awards, this one easily won my vote. Set in the future, they live in a world where water will fall on you out of nowhere if you lie – and how heavy the rain is depends on the strength of your lie. It also deals with cultural issues, and so perfectly captures family dynamics. I loved it.

9. Tip of the Tongue (Doctor Who 50th Anniversary E-Shorts #5) by Patrick Ness

Easily my favourite short in the ‘11 Doctors, 11 Stories‘ anthology that came out for the 50th Anniversary of Doctor Who. The Fifth Doctor and Nyssa travel to a small town in 1945 where ‘Truth Tellers’ are a craze sweeping the town – little objects that do as their name says… but of course, being Doctor Who, this is much more sinister than first thought.

10. Words Like Coins (Realms of the Elderlings novella) by Robin Hobb

Well it’s Robin Hobb, and it’s a Farseer short, and it deals with pecksies. It’s also illustrated throughout, which adds to how wonderful it is to read. Classic Hobb, good moral, and gets you to think of the literal meaning and the depth of your words.